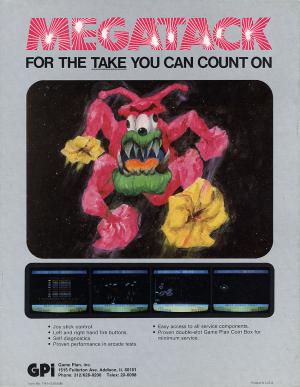 In the first part of each wave, space monsters descend from the top of the screen towards your ship, dropping bombs as they go. If they reach the bottom of the screen, they will start hopping towards your spacepod if they catch your spacepod, they'll eat it. In these rounds, your spacepod fires in three directions simultaneously straight up, and 45 degrees to either side. The eight types of monsters shown in the score table attack in the order shown for the first eight waves (i.e. wave 1 is all 100-point monsters, wave 2 is all 200-point monsters, etc.) wave nine is a mass attack of all eight types, and waves ten and up are randomly-chosen from the first nine types. Each space monster round contains a total of 25 monsters, though only eight will be on the screen at any one time. The second half of the wave starts out with a spinning space ring that drifts around the screen, growing in size if you shoot it, it splits into two smaller rings that go off in different directions and start growing again. If any ring reaches sufficient size, it will "tractor-beam" your spacepod into its center (your controls are frozen at this point) and then crush it. In this round, your spacepod only fires straight up the two 45-degree guns are disabled. The rings are worth the same number of points as the monsters in the first half of the waves. MEGATACK has a somewhat confusing way of indicating how many spacepods you have left. The number in the center of each pod is not a remaining lives indicator rather, it is the serial number of each pod, starting at three (or four) and descending towards one. This number does not change if you earn bonus pods rather, all of your bonus pods are numbered "0". Neither does the "x spacepods remaining" message that flashes briefly across the screen at the start of each player/pod's turn accurately reflect bonus pods rather, once you have exhausted your three standard pods, the game will repeatedly announce bonus spacepod and continue playing until you use up however many bonus pods you manage to accumulate.