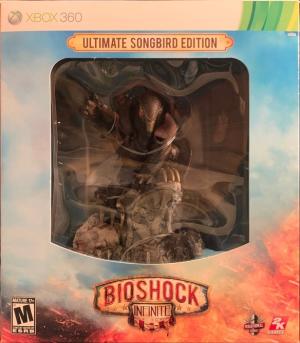 The game is set in the year 1912 and follows its protagonist, former Pinkerton agent Booker DeWitt, who is sent to the floating air city of Columbia to find a young woman, Elizabeth, who has been held captive there for most of her life. Though Booker rescues Elizabeth, the two become involved with the city's warring factions: the nativist and elite Founders that rule Columbia and strive to keep its privileges for White Americans, and the Vox Populi, underground rebels representing the underclass of the city. During this conflict, Booker learns that Elizabeth possesses strange powers to manipulate "Tears" in the space-time continuum that ravage Columbia, and soon discovers her to be central to the city's dark secrets. The player controls Booker Dewitt throughout the game, eventually working with the AI-controlled Elizabeth. Like previous BioShock games, the player uses a combination of weapons, clothing called Gear that offer unique attributes, and psychokinetic powers granted through Vigors. Elizabeth's powers can also be used to help fight hostile forces. In contrast to the limited spaces of the underwater city of Rapture, the openness of Columbia provides for more dynamic combat, including combat that takes place aboard the city's Sky-Line rollercoaster-like rail system. Downloadable content for the game includes a story-based mission, Burial at Sea, that links Infinite's story to that of the original BioShock game. The game won over 85 pre-release awards for its display at E3 2011, including Best of Show from the Game Critics Awards. At release, BioShock Infinite received critical acclaim, with praise particularly directed at its story, setting, and visual art design, and is often regarded as one of the best video games of the seventh generation of consoles. According to review aggregator Metacritic, it was the third-highest rated video game of 2013. Within two months of release, it sold over 3.7 million retail copies, and has since sold more than 11 million copies overall. It won year-end accolades, including Game of the Year from several gaming publications. A remastered version of the game will be released on Microsoft Windows, PlayStation 4 and Xbox One on September 13, 2016, as part of BioShock: The Collection, alongside its predecessors.