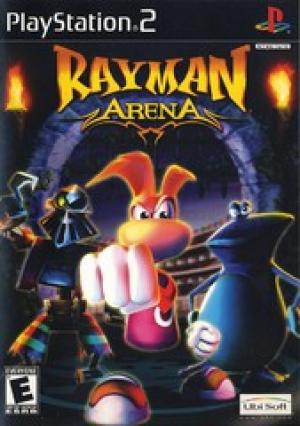 Rayman M/Arena features eight playable characters with the PlayStation 2 and PC versions: while Rayman Arena features nine different playable characters for the Xbox and Nintendo GameCube. Rayman: The hero of his land. Uses his hair to glide. He is the main character of the Rayman games, he may be somewhat small in stature, but he makes up for size with speed, agility, and a highly likable personality. His theme music uses some kind of banjo-like instrument and is a very catchy tune. He also has a skin of himself called Dark Rayman who is the main antagonist of the Xbox and Nintendo GameCube versions of Rayman Arena. Though it is only one of Rayman's skins, the game refers to him as Dark Rayman. It is the same as Rayman except for his appearance, which is drastically different from that in Rayman: A darker, almost black, purple shirt, with an "X" on it, fairly orange shoes, red hands, a yellow bandanna around his neck, and completely red eyes. He is unlocked by completing the Master Challenges. His music is the same as Rayman, because he's his skin (in fact, Rayman is the only character who only has one alternate skin). (GameCube/Xbox only) Globox: Rayman's dimwitted friend. Blows up like a balloon to glide. He makes appearances in many Rayman games. He may be daft and awkward, but he has spirit. His music includes a trombone, among other instruments. Dark Globox: In the Gamecube and Xbox versions of Rayman Arena, the player can unlock him. He's just like Globox but he is purple with a skull on his back. Another skin has a wolf on the back. He may look angry, but he is actually dumber than the actual Globox. He hangs on to an invisible purple lum to glide. His theme music is like a hundred singing frogs with a trombone like Globox. It was used as Globette's theme in Rayman Rush (not to be confused with Uglette, Globox's wife) .(GameCube/Xbox only) Tily: A small, furry fairy. Uses her wings to glide. She seems to be Ly's sister. Her tune is happy and fairy-ish. Pre-release posters of Rayman implied that Ly may have been a playable character, but however Tily seems to have replaced her. Henchman 800: A robotic pirate from Rayman 2. Uses the jet on his back to glide. He is a Henchman for Admiral Razorbeard. His music is a rock tune. Henchman 1000: An older model of the robot pirate. He seems to be a pirate/gangster/cowboy/salsa dancer robot. Like Henchman 800, He uses the jet on his back to glide. His tune is a rock n roll/rodeo tune. Teensies: Two senile old dwarves that work together in a race. One spins the other around the other's head to glide. In Rayman 2 it shows that they forgot who the king was so they take turns wearing the crown, and being king. Their music uses a synthesizer. Admiral Razorbeard: Short in both stature and temper, Razorbeard is the robotic admiral of the evil robot pirates. Spins his arms around to glide. He was the final boss of Rayman 2. His theme song uses an electric guitar. Razorwife: Razorbeard's awful wife, called Mrs. Razorbeard in the European version and the U.S. select screen. Flaps her arms around to glide. Her humorous tune is her dreadful opera singing.