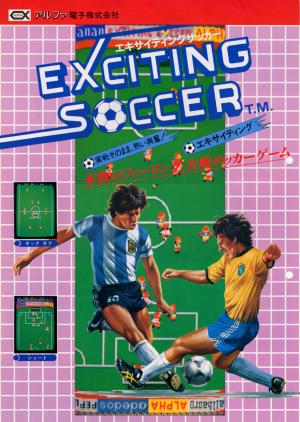 Exciting Soccer is an association football game which includes penalty shootout if the game ends in a tie. If you win the game you move on to the next level, each time the opponent gets harder to beat. When you start playing you can choose one of 6 teams: Italy, England, Brazil, West Germany, Austria, or France. The sequel Exciting Soccer II was released in 1984 with Japan replacing Austria and new music, but identical gameplay. The game let one or two players play, had a control scheme where they could tackle, shoot, short pass, and long pass, and had realistic touches like corner kicks, throw-ins, penalty shots, and cheerleaders, as well as digitized voices and an influential overhead view.