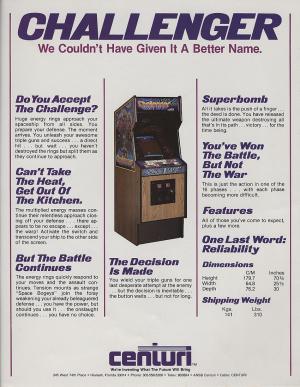 A frantic single-screen shoot'em'up in the vein of Jeff Minter, Challenger has you in your craft at the bottom of the screen, shooting bursts of three shots at 45° angles at flashing polygons. When hit, the polygons split into smaller ones, like in Asteroids or Pang. Your task is interrupted by incoming squiggly lines which will destroy your ship unless you hit it before it reaches the floor. Furthermore, a walking car or robot creature like the AT-ATs of Star Wars sometimes enter the screen, giving you bonus points if you locate your ship below it. As a safety measure, you have a smart bomb that damages everything onscreen, as well as the ability to change sides to the top of the screen if it gets too crowded at the bottom.