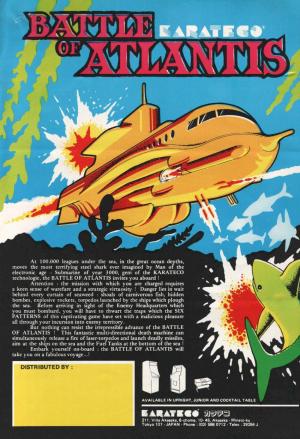 Battle of Atlantis is a scrolling shooter arcade game released by Game World Manufacturing / Comsoft in 1981, similar to "Scramble". It was designed and programmed by Andy Thomason. The mission of the game is to finish the six tables (levels) by shooting enemies. Through all six tables, build up your bonus by blowing-up the fuel tanks. Table 1 : Avoid and destroy the floating mines. Table 2 : Exploding sharks appear as well as the destroyers. Table 3 : A cavern where octopuses lie in wait. Table 4 : A complex of towers replaces the lower part of the cavern. As well as the destroyers and octopuses, the mines reappear in large numbers. Table 5 : Accelerated version of Table 4. Table 6 : You return to Table 1 in an accelerated version.