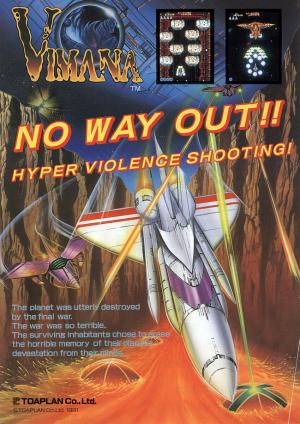 Vimana is one of Toaplan's most unique shooters. The level design is particularly creative, along with a unique charge shot and bombs. It gets its name from the Sanskrit word for "Flying Machine", described in Sanskrit Epics. The storyline involves a planet being attacked by seemingly indestructible alien forces that induce fear and insanity to all that oppose them. The last hope for this planet is the Vimana Warriors, two ships that are empowered by the Hindu god Ganesha to defend against the aliens and restore peace to the galaxy. The Vimana warriors are the player one and player two ships, each equipped with a shot that charges in the shape of a V. Once the shot is released, the V shape explodes forth in an arc, hitting almost everything in front of it. This sounds like it would be a very powerful weapon, but this leads to Vimana's main problem - none of your attacks ever do enough damage. Even the weakest enemies will take more than a few hits to destroy, even if your weapon is fully powered up. Bombs are similarly underwhelming, consisting of seven balls of light that rotate around your ship and guard you from shots. Once an enemy comes onto screen, a light ball will jump out from the group and crash into the enemy, likely destroying or heavily damaging it. Unlike in Fire Shark, where you can pick up new weapons, Vimana does not offer any weapons other than standard shots, charge shots, and bombs. Vimana has some bits of creativity in its levels. One in particular has moving enemy searchlights, which will fire hard to dodge bullets if it spots you. An interesting boss fires from the bottom of the screen as opposed to the top. Vimana also attempts to squeeze around 50 enemy bullets on screen at once, making it feel like a sort of prototype bullet hell shooter. Vimana was never ported to any home systems, but like Out Zone it would not have really fit onto any of them very well. The music was done by Toshiaki Tomizawa, who would later go on to make soundtracks for Fixeight, another Toaplan shooter and many of Cave's games, including Dodonpachi, Progear, Guwange, and ESP Ra. De..