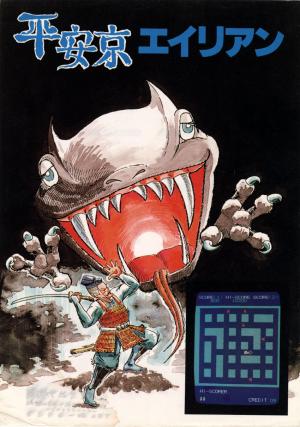 The player controls a Heian period police officer who must defend the capital city from an alien invasion by digging holes in the ground and filling them back up after an alien falls inside. The player scores points for every alien trapped, and the quicker the hole is filled up after the alien falls in, the higher the number of points are scored. The aliens increase in number as the levels progress, and they can escape from holes after a certain period of time elapses or if another alien passes above their hole. The player loses if he comes in contact with an alien. There is a time limit for each level, and the number of aliens increases drastically when this limit is reached, essentially preventing the player from completing the level.