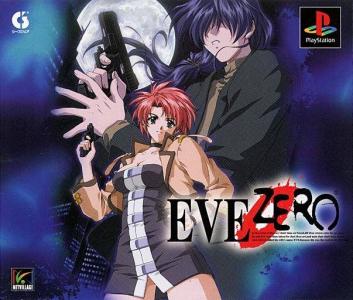 Follow the witty and womanizing private investigator Kojiroh Amagi, and the beautiful red-haired secret agent Marina Hojo. The events of the game take place shortly before those of "Eve Burst Error". Kojiroh is working at Katsuragi Detective Office together with his girlfriend Yayoi. Dr. Nishina, the head of a genetic research facility, hires Kojiroh to investigate the disappearance of his son Shin. At the same time, Marina receives an assignment from her boss Kono, which involves watching over a representative of an American company. As in all EVE games, the two stories appear unrelated in the beginning and are gradually linked together later in the game. Ever wondered what was Marina's previous assignment, with whom did Kyoko Himuro work before, or what exactly happened to Genzaburo Katsuragi when he was still the chief of Katsuragi Detective Office? Cared to know more about the appealing protagonist, Kojiroh Amagi? "Eve Zero" gives the answers to those questions.