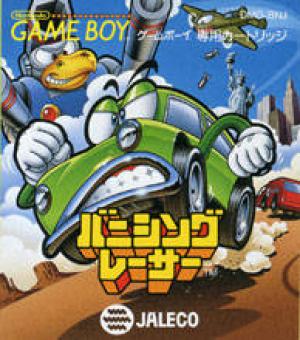 Banishing Racer (バニシングレーサー?) is a Japanese platforming video game developed and published by Jaleco Entertainment for the Game Boy exclusively in Japan. It was released in Japan on July 26, 1991. Banishing Racer was also sold around Hong Kong. The game allows the player to take control of an animated car against numerous enemies that must be jumped on to defeat, in a fashion similar to Super Mario Land. The player has three lives before being allowed to continue or start over. One hit kills the player and forces a restart from the beginning of the level. The car model used within the game looks very similar to a Subaru 360.