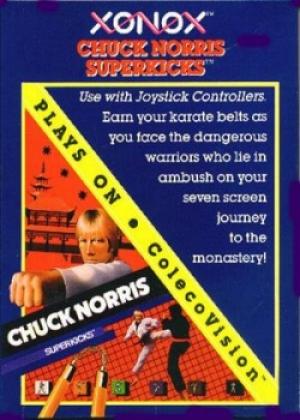 Chuck Norris Superkicks, is a 1983 video game produced by Xonox where the player takes control of Chuck Norris. It was later sold as Kung Fu Superkicks when the license for the use of the name Chuck Norris expired. The game was produced for the Commodore 64, Commodore VIC-20, Atari 2600, and Colecovision as part of Xonox's double-ender cartridge line (cartridges with two games and two connectors that were flipped over depending on which one the user wanted to play). The player is a martial arts expert that has to liberate a hostage. The game combines two types of game-play: moving through a map, and fighting against enemies.