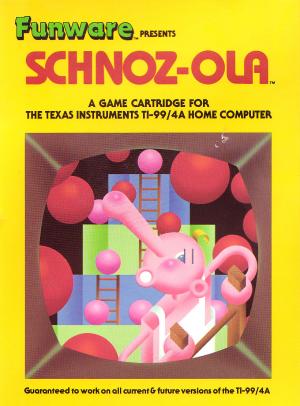 Schnoz-Ola is the last known cartridge to be produced by Funware after the Creative Software buyout. The first cartridge sold by Creative/Funware was St.Nick and is the only other title known to be sold in the Creative/Funware yellow packaging. All other Funware titles were released before the buyout, and therefore sold in different style packaging. This game is a clone of the 1983 Atari arcade Crystal Castles. According to Michael Brouthers, it only cost Funware $4 US to make each cartridge game! In 1983 there were as many as 3 companies interested in buying out Funware, those being Activision, Epyx, and Creative Software. As one might be able to tell from the box scan on this page, Funware was eventually sold to Creative Software. However, both Epyx and Activision would later give a go at marketing TI-99/4A games independently near the end of 1983.