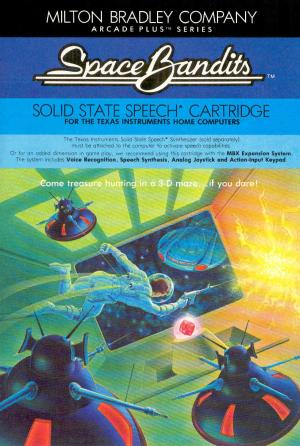 Space Bandits is quite possibly the most unique game out of all the MBX titles. You take control of a robot who must collect Earth's Energy Crystals that were stolen by "Computer Controlled Androids". The uniqueness of the game comes from the fact that not only can you walk up and down the corridors on the bottom of the screen, but also on the sides and top of the screen. Therefore, the game has a 3D aspect to it which makes your mission much harder to complete, especially considering that the controls change accordingly with the different sides of the screen (if you are controlling your robot on the bottom part of the screen all that is needed to move forward is a press "up" on the joystick. However, once on the top of the screen, a press "down" on the joystick moves you forward). This change of joystick movement helps create a more realistic feel that really helps the game out and makes it more fun to play, however frustrating it may be first. After you have the controls for the game down, which can prove to be very tricky, the next step is to go about completing your mission to get back all the of the Earth's Energy Crystals, which are represented by little red diamonds throughout the 3D maze. However, there are a few curve balls thrown in. If you are unable to collect the crystals after 40 seconds, they become radioactive. This means that if you touch a crystal once it's radioactive (they turn white after becoming so) you will lose a life and fall off into space towards a purple alien ship which appears in the center of the screen. On the other hand, if you do collect all 4 crystals from that round, you might think your job is done, but that's not the case. Even after all the crystals are collected you must still blast the white androids which follow you throughout the maze. Only after all of the androids have been killed will you be able to advance forward. The robot you control in the game is also equipped with an electronic vapor gun that will shoot a pulsar beam all the way around the screen which can actually come back and hit you if not careful (and the range of your shot increases as the game progresses, so an accurate hit is necessary later on!). When you do manage to hit one of the androids through they do not simply vanish from the screen, but instead leave behind an energy mass which cannot be passed through by your robot. On later levels when there are many androids roaming about the screen a well planned shot is necessary, because you could actually cage yourself in due to the energy masses. However, there is a way out of a jam if you find that all the crystals have turned radioactive (and therefore cannot be collected) or if you find yourself caged in by energy masses. By the press of a button, you can Beam Up to your yellow ship and then be presented with a fresh board and start all over (but then you lose any crystals you might have managed to collect and the game gets a little harder). One other thing to note about the androids is the fact that they can shoot anti-gravity spray at you, so getting out of the way of their line of fire is another challenge faced on your quest to save the earth. One last little nifty feature of the game is the ability to wear a defensive shield which makes you invincible to anything on the screen. However, the shield can only be used for as long as the red bar on the top of the screen indicates (you actually can take off the shield at any point after putting it on to save the energy bar from being depleted). The shield, and all these other little bonuses tossed into the game, can all be accessed by either the press of the button or by voice recognition if the MBX gaming add-on is attached. All one would need to do in order to activate the shield, for example, would be to simply say "Shield" into the microphone! Space Bandits is a very interesting game, and has a lot of unique features. However, the mainstream gamer might be turned off a little by the easiness of the first few rounds. At first I wrote this game off as being too easy, but after playing it through to the 5th level I found myself being caged in numerous times by the androids who were out to get the crystals I had collected! So when you give this game a try, play into it a little as the challenge can pick up fairly quickly. In addition, as with all MBX cartridges, this game uses voice recognition and synthesis very well. Being able to speak plain English into a microphone to tell your robot what to do is really a great added dimension to the game. So if you're a space shoot 'em up junkie, you might find all the options available in Space Bandits interesting and entertaining.