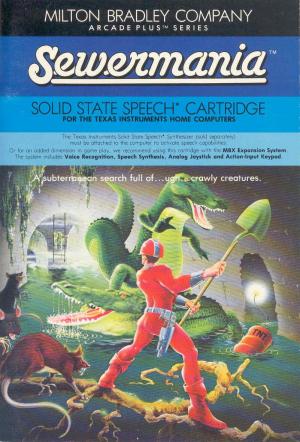 This game was designed by both Beverly Starke (Milton Bradley graphics artist) and programmer Dave Landon. According to Dave, Sewermania was MB President Jim Shea's favorite game out of all the MBX titles that were in development. According to early promotional material, the generator located in the upper left corner of the screen was intended to flood the sewer and kill all the rats. This would help the player in locating the bomb since there would be no rats to avoid for a few seconds (although the alligator would still be lurking around). In the released version of the game, however, the generator's functionality was removed making it impossible to flood the sewer. According to programmer Dave Landon the reason for the removal was because the game was initially developed for MB's own video game unit before being brought over the TI-99/4A (read the MBX development history by clicking the link in the above Trivia section). The TI-99/4A's cartridges were smaller in size apparently to what Milton Bradley had envisioned for its own system, so to meet memory constraints the functionality of the generators had to be removed. This game can be used with Milton Bradley's MBX System (an add-on for the TI-99/4A). The MBX allowed for the use of Voice Recognition, improved Speech Synthesis, a 360° Analog Joystick, and an Action-Input Keypad for video games designed for it. Easter Egg Alert! At the beginning of the game the phrase "Dave, find the bomb" is spoken aloud by the MBX system or the Speech Synthesizer (depending on if you have an MBX system or not). The "Dave" being referred to is programmer Dave Landon.