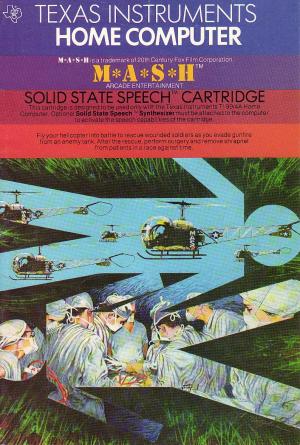 M*A*S*H was one of the many attempts by various software companies to take a successful movie or television show and convert it into a playable game. In this game, you play the role of "Hawkeye Pierce," a surgeon stationed at the Mobile Army Surgical Hospital #4077 during the Korean War (1950-1953). There are two main stages in the game, each of which you must pass to move to the next round. The first mission involves rescuing injured soldiers from the battlefield with your helicopter and returning them to home base without being shot down by enemy tanks. The second mission takes place in the operating room while you are required to carefully remove bullets and shrapnel from wounded soldiers... it is very similar to the classic "OPERATION" tweezers game by Milton Bradley. Each set of missions are repeated four times. The first player to reach 999 points wins the game. There are four different variations of games, each selectable as either one player (against the computer) or two-player mode.