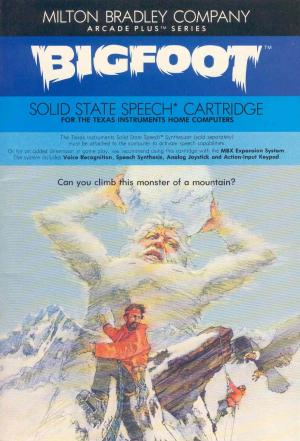 In Bigfoot, your ultimate goal is to scale a mountain and capture the eponymous creature, who stands at the summit. Along the way, you collect food and gold. However, in order to collect one bundle of gold (yellow piles), you must first collect one bundle of food (green boxes). Using the fire button, you throw ropes which are used for climbing up the platforms. Once thrown, you can scale up and down the ropes. Bigfoot hurls boulders at you as you go. If your rope is near the edge of a platform instead of near the middle, you run the risk of being smashed by a boulder as you climb up the rope, so throwing the rope near the center of a platform is safest. During later levels, birds will come along and snag the ropes - fatal if you happen to be on a snagged rope at the time.