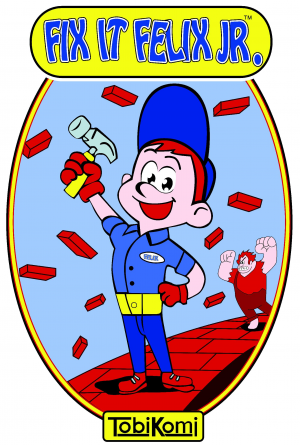 In the quarter-muncher Fix-It Felix Jr., the thick-headed thug Wreck-It Ralph tries to destroy a building while the daring do-gooder Fix-It Felix repairs the damage with his magic hammer. This "arcade" game is the basis of the Disney animated movie Wreck-It Ralph. In the film, Ralph is the bad guy, but that doesn't mean he is a "bad" guy, -- it's just his job to be a heartless demolisher so that Felix can save the day. But countless games where Ralph has played the villain has taken its toll, and after becoming the outcast of his mostly-wrecked town, Ralph is ready to look for more out of his pixelated life. Fix-It Felix Jr. is seen in the movie Wreck-It Ralph, and Disney has produced promotional display cabinets as part of the marketing of the film. Whether this arcade game itself will be released for the public to play is unknown at this time; a web version of the game is playable courtesy of Disney.