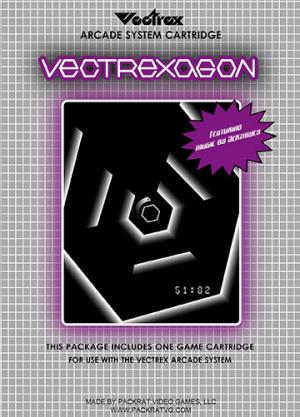 From http://www.packratvg.com/vvgon.html A new game for the classic Vectrex console for 2016! Avoid hitting the walls while the difficulty increases, with everyhing moving faster and faster in beat to the pumping soundtrack. Programmed by Andreas Gustafsson, music by Yerzmyey (of AY-Riders), and based off a game concept by Terry Cavanagh. This is the 'unlimited' release of Vectrexagon, which will be made as long as there is demand for the game (meaning it will be made for a long time). Note: Each game comes with a unique number on the inside of the box cover, indicating which manufactured game the purchaser has bought, as the games are made. The number shows how many have sold so far, and which one was purchased.