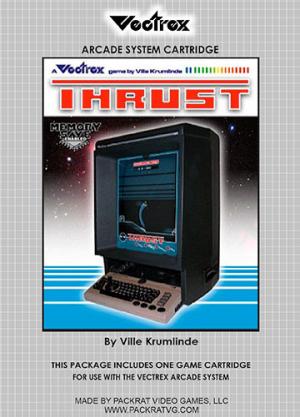 From http://www.packratvg.com/vthrust.html Ville Krumlinde created Thrust in 2004, and it has been compared to the arcade game Gravitar, but tougher. It works well though, as the player has to penetrate various planets to attach a tow-bar to Kylstron Pods, and get out alive. In doing so you can stop the Intergalactic Empire from achieving its evil plan. The game is difficult enough to make a gamer curse, but fun enough to make one smile too! Thrust features: - Configurable controls - Three game modes (Normal, Hard, and Time Attack) - Three Difficulty Levels (Normal, Reverse Gravity, and Invisible Landscape) - Hidden game (ZSB) (NOTE: Current 1.2 version of game fixes a bug in the hidden game that could cause the game to crash. All cartridges sold after Feb 15th, 2016 include this bug fix. Contact Packrat if you'd like the upgrade, as this is not covered under any warranty, as this bug existed since 2004 and was only recently found and fixed)!