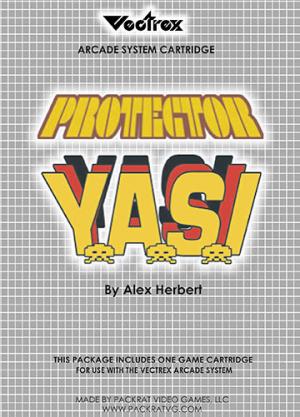 From http://vectrex.wikia.com/wiki/Protector/Y*A*S*I The Vectrex community was taken by surprise in 2003 when the announcement of the upcoming, original release of Protector LE was revealed, as Alex Herbert envisioned that the arcade classic of Defender could be brought to the Vectrex. Many people were stunned when a downloadable video was posted as well, showing that the fast and furious gameplay from the original did indeed seem to be possible after all. It quickly sold out of its 100 copies in less than three weeks of release[1], which came with an overlay (a bit rare for Vectrex homebrews in general), were numbered and had an embossed foil logo on its box. It also came with the Spike Goes Down game included with it as well as an unlockable bonus. Then later on that year, the unlimited edition of Protector was released, although with a different game included, being Y*A*S*I, which stands for "Yet Another Space Invaders", as that game was a clone of that arcade classic (hence the title of this release being Protector/Y*A*S*I this time around). Again this was a bit of a surprise within the Vectrex community, as a lot of gamers in general didn't know that the Vectrex is capable of producing raster graphics as well, which Y*A*S*I proved by looking almost exactly like it's arcade cousin, having bitmapped, rather than vector graphics (note: Spike Goes Down also had raster graphics as well, it's just that this unlimited version is more well known, especially since the ROM for Spike Goes Down has yet to be released years later). No overlay was provided this time around though. Protector/Y*A*S*I instantly became one of the "must haves" for the Vectrex and was originally sold on the Vectrex carts web site until that was taken over by John Dondzila, where it is still available to this day at his Classic Game Creations site. Both versions are for one player only.