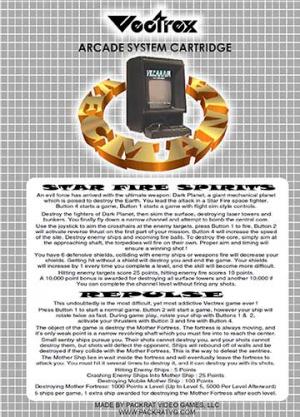 From http://vectrex.wikia.com/wiki/Vecmania Vecmania has the largest amount of games for a homebrew compilation for the Vectrex, with a full seven games (one hidden) and two unfinished demos, being clones of the arcade games of Tempest, Star Wars, Missile Command, Space Invaders, Eliminator, Breakout, Discs Of Tron, Asteroids and Phoenix. The games can be scrolled through at the main menu by moving the joystick or D-pad left and right and then chosen by pressing up on the joystick or D-pad. The main menu can be returned to by pressing three on the controller when the player is on an individual game's title screen (except for the demos). Games in Vecmania: - Star Fire Spirits - Repulse - Vector Vaders Remix - Patriots Remix - Rockaroids Remix - 3rd Rock - Disc Duel Demo - Abyss Demo