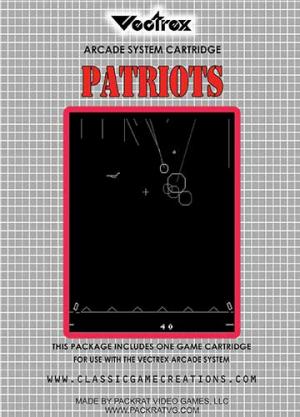 From http://www.packratvg.com/vpatriots.html Patriots made its first "official" public appearance at the quarterly collectors meeting at Video Game Connections in Howell, NJ on April 21st, 1996. The game was written by John Dondzila. Patriots is a clone of a popular arcade game from the 80's. Patriots is faster and more challenging than other missile games. It is visually exciting, with many special effects, including fades, scaling and rotation. Game control is solid with additional options for those who need them. Patriots code is optimized to make the game run very, very smooth. Vectrex "flicker" is almost nonexistent, except for higher levels with tons of missiles, patriots and explosions all happening at once. By the way, Patriots contains a "SECRET" game!