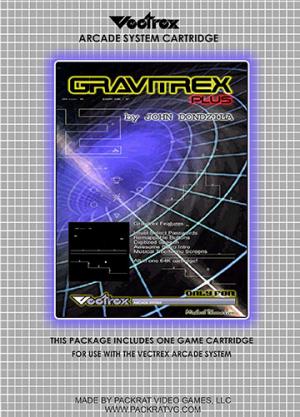 From http://vectrex.wikia.com/wiki/Gravitrex_Plus Gravitar was a vector graphic arcade game that took some of the elements of Asteroids (the controls and free flight abilities of the player's['] ship[s]) but made them more restrictive by placing players inside a series of planets. Players had to skim surfaces of the planets and destroy all the bunkers therein, as well as beam up fuel cells to maintain their fuel level(s) and avoiding or destroying saucers that would also appear. The game did not do very well commercially and would only be ported to the Atari 2600 a few years later (although it has reappeared on some modern day compilations since). Gravitrex is a clone of Gravitar, although with many differences, such as the addition of humans dotting the planetary landscapes that have to be rescued, and the Gravitrex Plus cart also includes two bonus games and other features as well. All games are for one player only. Gameplay: The player controls a fighter ship that begins each game in a solar system. There is a sun in the middle and several planets to choose from to enter so the player can start their mission. If the player takes too long with choosing a planet, a pair of space saucers will emerge from the reactor planet and will engage the player in a dogfight if they get close enough (although the player can just elude them by entering a planet). If the player’s ship gets destroyed or the player shoots both saucers then the player will return to the main solar system screen. Once the player enters a planet by thrusting into it, they must destroy every enemy bunker on the surface and dispose of every fuel tank and human. Humans and fuel tanks can be shot (although the player will not receive any points for doing so), but a bonus is given if all humans are rescued on a level (see Scoring and Extras sections), plus fuel tanks are needed to keep up the player’s fuel level (which is indicated by a line right next to the score at the top left of the screen). Humans and fuel tanks can be teleported into the player’s ship by maneuvering their ship close and activating the teleporter/shields function. Once all bunkers have been destroyed and all humans and fuel tanks have been disposed of, a sound effect will signal that the mission is complete, and upon leaving the planet, it will self-destruct and the player will be given a bonus for that planet. The exception to this rule is the lone reactor planet on each level, which has only one target – a reactor – deep inside it. This planet is different than all the others, as the player is given 99 time units to make their way through a brief maze, shoot the reactor, and get out before time runs out or else the player’s ship will be destroyed and the reactor will remain intact. If the player does not destroy this planet last in a level then it clears out the space saucers for the remainder of the level, since this is the planet that they emerge from. Dangers include the player’s ship crashing if it runs out of fuel, plus the ship will be destroyed if shot by a bunker, space saucer or alien air interceptor (which are similar to space saucers but they appear inside a planet), if they crash into a wall, the sun, space saucer or alien air interceptor, or do not leave the reactor planet before their time runs out. If the player runs out of reserve ships then the game will end. The player’s fuel, however, is replenished mostly from a fuel tank and is fully replaced upon destroying a planet, finishing a level, or with each new ship. The player’s teleporter function also doubles as a shield to protect them from enemy fire. Also, if the player defeats all planets in a level, then that level’s sun will go nova, various bonuses are then awarded (see Extras section), and if the player defeats the third level the game will end, giving a congratulations message as well as sharing some trivia about Gravitrex from the game’s programmer John Dondzila on the screen.