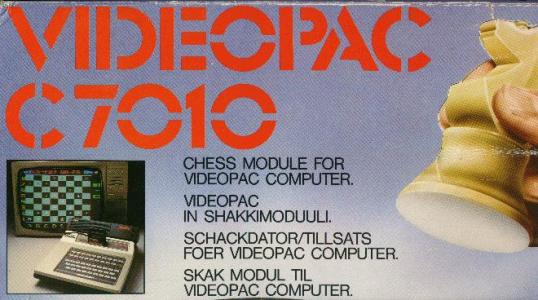 The C7010 is one of the harder to find pieces of Philips Videopac hardware, especially complete with box and manual. There are at least two different box and manual versions, one for the main European market, one for the North-European market. Since the G7000 didn't have enough RAM memory and computing power for a chess program, Philips decided to equip the chess cartridge with an add-on computer module that sits on top of the G7000 console. The module gets its 5V and 300mA from the main console. The chess program itself resides in an 8244 EPROM chip on the cartridge and is connected via input/output latches to the C7010 CPU's databus. The extra processing power is provided by an NSC800 8Bit CMOS microprocessor running at 4.43 MHz. The C7010 also has 2K of RAM and 8K of ROM (OS or part of the Chess program itself?). Besides some logic chips there are two MM82PC12N (output latch and address latch) and an empty socket. This socket was unused on the boards of all the four Chess units I opened so far - maybe there were some other versions planned? The empty socket has all the address lines for another 8K. From the looks of it the C7010 could have been adapted to run other programs - an interesting possibility. All the C7010s I've seen so far have been of type C7010/05 but the service manual mentions 00, 05, 16, 18, 19 as possible versions - not sure what the differences are. If you have a different version please let me know and send me a scan - thanks! And if you're really brave please open up your C7010 and send me a chip listing - thanks!!! In ads the C7010 was touted as the 'serious' chess cartridge among the various videogame consoles, but it was quite pricey and sold at DM 300 - 400, about 4 - 5 times the price of the Atari 2600 chess cartridge (the famous cheating one) and thus putting it well out of reach of young videogame players and targeting the adults instead. The C7010 manual is very detailed and provides a good introduction to the game of Chess.