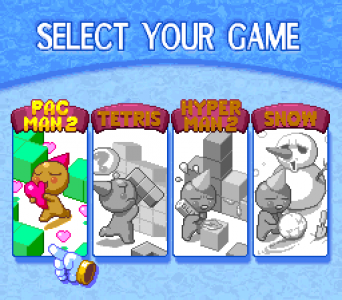 Puzzle King is a compilation arcade game that was released by K1 Soft and HAN System, in 2002; it runs on the same hardware used by Toaplan for Snow Bros.: Nick and Tom in 1990, but increases its Motorola 68000 to 16 MHz, decreases its Zilog Z80 to 4 MHz and utilises a Yamaha YM-2151 and an OKI MSM-6295 for audio instead of a Yamaha YM-3812. Three of its four titles were initially released by other Korean manufacturers under different names, and one is that aforementioned "Snow Bros.". Games in this compilation : Pac-Man 2 (1995): Initially released under the name of "Hyper Pac-Man", by SemiCom, this is the second compilation that this unofficial title for Namco's Pac-Man series has been featured in (as it was previously in SemiCom's own XESS: The New Revolution under the name of "Hyper Man" in 1997). Its new title should also not cause confusion with Pac-Man 2: The New Adventures (1994). Tetris (2002): This variation on Alexei Pazhitnov's "Soviet puzzle game" was never released as a standalone game, but features new characters including a chicken called "Cocki-U" and a farmer. Hyper Man 2 (1997): Originally released under the title of "New Hyper Man" by SemiCom in their aforementioned "XESS", this is (again) the second compilation that this unofficial title for the Pac-Man series, in which the Pac-Mans stop moving if the joysticks are let go of, has been featured in. Snow (1990): Originally released under the name of "Snow Bros.: Nick and Tom" by Toaplan, this single-screen platform game now has new audio; it's also worth noting that the ending sequences of all three of the previously released games were removed for this compilation and replaced with a generic screen featuring a grinning clown holding a piece of paper with "THE END" written on it.