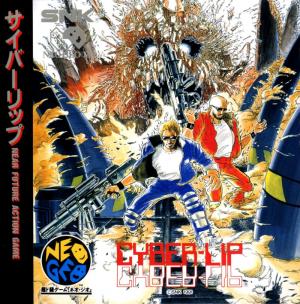 Cyber-Lip is a horizontally scrolling, side-view platformer shoot 'em up (this combination is sometimes referred to as "run and gun") arcade game released by SNK Corporation in 1990 for the SNK Neo-Geo MVS. Players control Rick and/or Brook, two human veteran soldiers, who are sent by an unspecified "federal government" into combat on a last-ditch attempt to save Earth from a malfunctioning military supercomputer in charge of all military androids. Gameplay consists of battling through large amounts of enemies, collecting power-ups and defeating several end-of-stage bosses. This makes it comparable to the likes of Metal Slug or Contra in terms of gameplay. A handful of members from Irem developed this title and later went on to create Metal Slug. The game was later ported over for the Neo Geo CD system, in 1995. The CD featured improved voice acting and added a short introduction to the game explaining the plot.