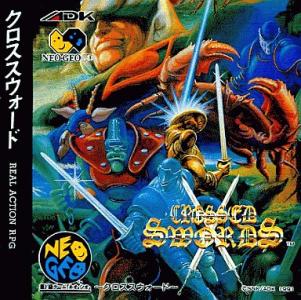 Crossed Swords is a hack & slash action RPG arcade game developed by Alpha Denshi and published by SNK for the Neo Geo arcade system in 1990 and Neo Geo console in 1991. Its gameplay was similar to SNK's earlier 1990 first-person shooter and beat 'em up game, The Super Spy, but with role-playing game elements and hack & slash combat instead of shooting and fist-fighting. The game allowed cooperative gameplay with up to two players on the same screen. As only the player characters' silhouettes are visible on screen as wire-frame models, much like Punch-Out!!,[2] the game's perspective may be considered either first-person or third-person. The game was later cited as an inspiration for the 2010 first-person fighting game Rage of the Gladiator. A sequel of the game entitled Crossed Swords 2 was released in Japan on May 2, 1995 for the Neo-Geo CD, and was one of the few games designed specifically for the Neo-Geo CD, rather than being an arcade port. For more info look at Crossed Swords II.