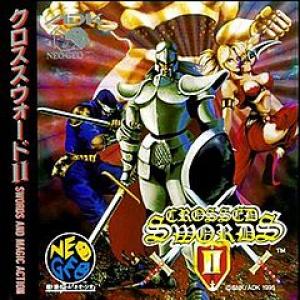 Crossed Swords is a hack & slash action RPG arcade game developed by Alpha Denshi and published by SNK for the Neo Geo arcade system in 1990 and Neo Geo console in 1991. Its gameplay was similar to SNK's earlier 1990 first-person shooter and beat 'em up game, The Super Spy, but with role-playing game elements and hack & slash combat instead of shooting and fist-fighting. The game allowed cooperative gameplay with up to two players on the same screen.[1] As only the player characters' silhouettes are visible on screen as wire-frame models, much like Punch-Out!!,[2] the game's perspective may be considered either first-person or third-person.[citation needed] The game was later cited as an inspiration for the 2010 first-person fighting game Rage of the Gladiator. A sequel of the game entitled Crossed Swords 2 was released in Japan on May 2, 1995 for the Neo-Geo CD, and was one of the few games designed specifically for the Neo-Geo CD, rather than being an arcade port. Crossed Swords requires correct timing and movement to progress. The basic rule for the game is to defend first before striking. The player wields both a weapon and shield and can strafe, as well as guard the upper or middle part of the body. Two different weapon strikes are available, a regular attack and a thrusting attack. Weapon-based magic can also be used. Multiple paths through the game are available and the player has an option to skip the first and second chapters freely. In the enchanted land of Belkana all was well until plagues of creatures started rampaging through. But it didn't stop there, from deep within the mountains of Graisia, the Demon Warlord Nausizz arose and led the attacks wiping out settlement after settlement. However a brave warrior called "The Knight of the Journey" came a long way on a quest to stop these monstrosities. After aiding the Poor Village of Dio from the Caterdragon, the knight heads to the Castle Pulista, but as he is briefed by the king of the problems they face, an elite dark knight appears and kidnaps the princess. The knight fights his way through the enemy lands in the Matius Tower, the Gauda Fortress, the Land Battleship and finally passes the Entrance to the Devil World. Along his way, he is helped by loyalties of the kingdom. The knight battles through the Castle Graisia and comes face to face with Nausizz. As a demon with honour, Nausizz is so impressed with the knight's progress, that he has sent the princess back to Pulista. As the knight defeats Nausizz, he transforms into a fiendish demon dragon. The knight slays him and escapes the collapsing castle. Back in Castle Pulista the knight is offered to come and live with the king. Peace can proceed once more in Belkana.