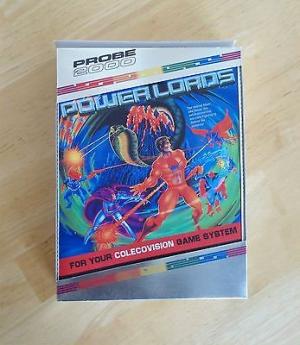 As superhero Adam Power, you’re the pilot of a space sled on patrol around the explosive Volcan Rock, and what better cover for the bad guys? An enormous laser-eyed space serpent is coiled around the mountain, and you have to take it down single-handedly. Once See the videoyou’ve baked the snake, you land your sled on the surface and have a shootout with Gryptogg, Raygoth and Arkus. Once you’ve beaten them back, you can explore the underground caverns, collecting their instruments of evil and exchanging fire with them again. When you escape from their maze, you advance to the next level and begin the fight anew. (North American Philips / Probe 2000, 1983 – unreleased) This Colecovision adaptation of the Odyssey2 game (now there’s a phrase you’re never going to see again), based on a less-than-blockbuster-successful series of comics and action figures, adds more depth to the game than the dear old Odyssey ever could’ve managed. But it’s hard to tell how much depth, as the game was never completed. The “snake” screen, though it’s much more impressive visually than its counterpart on the Odyssey2, is just plain boring. The O2 edition of Power Lords also forced you to dodge earthbound meteors and an “artificial black hole” within the volcano that could drag you to your doom if you got on a horizontal line of sight with it when it opened. On the Colecovision, all you have to contend with are enemy vehicles and a slow-moving snake. It takes more time than effort to clear this screen, and it’s ultimately a bit boring. The other screens, which aren’t even hinted at in the Odyssey2 version of the game, are also a bit tedious – enemy A.I. and combat programming obviously weren’t finished when the game was abandoned. You can exchange fire with your interestingly-animated opponents, but sometimes they just stop firing and disappear. Convenient, sure, but not terribly exciting. “Probe 2000” was an imprint – akin to Atari’s “Atarisoft” division – opened by North American Philips to release games for hardware other than the Odyssey2, which was by now firmly into its twilight. The only game actually released by Probe 2000 was War Room, programmed by Bob “RoSHa” Harris (who created Killer Bees on the O2). Probe 2000’s next release would’ve been either Power Lords or the impressive RPG Lord Of The Dungeon (which was left in limbo because its battery-backed-up cartridge, capable of saving the player’s position, was an idea that just wouldn’t be practical until the NES era). The intellectual property rights to Pink Panther had been snagged by N.A.P. for the Odyssey2 and other systems, but the only version of that game that has ever surfaced has been an incredibly rare Atari 2600 prototype. N.A.P. ultimately got out of the game business, leaving both the Odyssey2 and Probe 2000 behind.