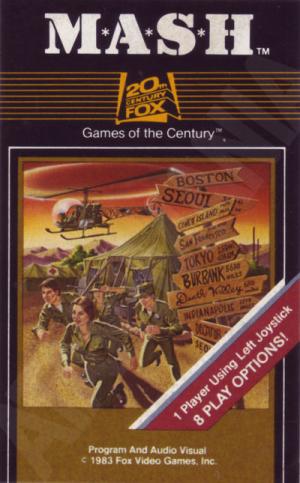 M.A.S.H. is loosely based off of the hit TV show of the same name. It is actually two separate games that can be played four different ways. In each game you play Hawkeye and play against Trapper who is either player 2 or the computer. The object of either game is to get 1,000 points first. The first game is a Choplifter style game where you must maneuver your helicopter through the jungles of Korea picking up the wounded until your chopper is full and then return them safely to base. You will have to compete with Trapper in collecting the limited number of wounded while navigating through the trees and past tanks who are trying to shoot your copter down. In the second game you're in the operating room and must remove the bullets from your fallen comrades without further injuring him, much like the board game Operation. Style one is Welcome to Korea which features both styles of game switching back and forth. Style two is Operating Room which is just the Operation challenge. Style three is Chopper Challenge is just the Choplifter style game. Style four is Heavy Flak which is just like style three but with many more injured to rescue and more tanks to avoid.