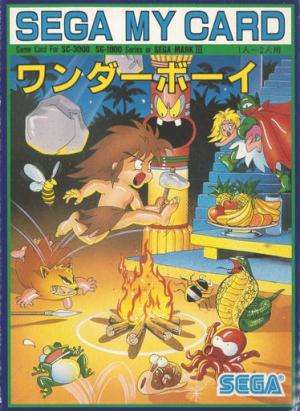 Wonder Boy is a platform game developed by Escape and Sega in 1986 for Sega System 1 and Sega System 2 arcade hardware. WONDER BOY starts off a long and hazardous journey in pursuit of KING, who has kidnapped his girlfriend, TINA. KING lives in a faraway place, inhabited by monstrous creatures and full of many surprises. On the way, our hero has to collect food to increase his energy. WONDER BOY's ultimate mission is to rescue TINA and prove to one and all that true love always triumphs. Wonder Boy is a sidescrolling platform game, in which the basic goal is to keep heading to to the right, avoiding obstacles, attacking enemies and jumping across platforms. Though it is not a requirement to do so, the game encourages players to keep moving to the right, as health decreases over time and the screen cannot scroll left. Health, and by extension, time, is added to by collecting fruit. There are numerous items hidden in eggs, including hammers, skateboards and fairies which can assist Tom-Tom in his quest. One button jumps, another attacks. If the attack button is held, Tom-Tom will run and be able to jump higher, similar to the mechanics in Super Mario Bros..