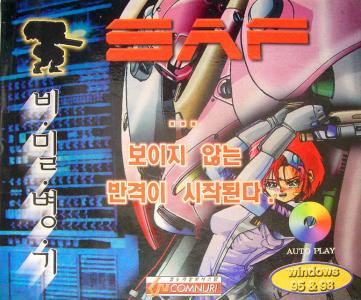 Family Productions last side-scroller released in the final days of DOS gaming, SAF: Secret Armored Force gets rid of all the technical issues from which former games by the company suffered. Even the scrolling runs perfectly smooth, and there are real transparency effects, which are not too common with DOS games overall. Although not a sequel per se, the game soon evokes memories of lazenca, not only because the player once again takes place in a mecha. Instead of having to chose between two models, though, the machine in SAF unites the agility of the Ripple with the weapons and jetpacks of the Cyber-Troll and for good measure throws in the left & right fire buttons of the shmup sequences in lazenca. Weapons can be upgraded in two levels, and filling the upgrade meter above that unleashes a devastating special attack particular to that weapon. During the first four stages weapons get gradually unlocked. After the initial machine gun follow a frame thrower, a grenade launcher and a laser cannon.