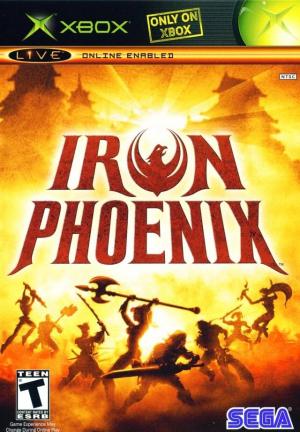 Iron Phoenix is a Wuxia/Hong Kong Cinema style fighting game that allows Xbox Live battles with up to 16 players. The fighting system is based on the weapon and character selection, allowing hundreds of move combinations. In the distant past, a meteorite fell to earth (the "Iron Phoenix") and was forged into seven powerful magical weapons by a master weaponsmith. They proved to be his doom, however, as the World of Martial Arts is nothing if not unkind to those without the power to protect what is theirs. Combatants choose from 10 character models, each of which has 2 variations. There are also a variety of monster and undead models that can be used. Each character has different configurations of strength, speed and health, affecting their performance in a fight. These characters are combined with weapons (sometimes pre-selected, sometimes grabbed in a free-for-all during a fight) to allow for a wide variety of play styles. The weapons are: Phoenix Wings (Hand Blades), Searing Dagger, Ember Sword (Longsword), Phoenix Tail (Long Spear), Ash Blade (Scimitar), Meteor Hammer, Flame of Heaven (2-Handed Sword), Phoenix Talons (Hand Claws), and the Feather Blade (Ninja-to sword). Players can also pick up a variety of darts which can poison or slow a target, in addition there is a variety of equipment that can grand special powers, such as increased strength, invisibility, and movement. Movement in the game is based in the wire-fu, with leaps, flips, wall-running, etc. A move power meter governs this aspect of play, recharging over time. The game is all-combat, all the time, either single player or Xbox Live. Single players can go up against a custom build out of bots, in a variety of game modes: Deathmatch, Team Deathmatch, VIP, Giant Kill, and Challenge Ring. These modes are available online as well, allowing up to 16 simultaneous players to engage in high-flying martial arts battles with exotic weaponry on Xbox Live.