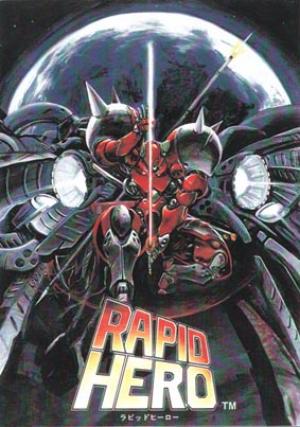 Developed by NMK. A totally awesome but fairly obscure shooting game about chasing a mech through space, and every time you encounter him he seemingly has bigger and better equipment. Awesome backgrounds and bosses adds to make this just too awesome. In Rapid Hero, collecting stars will award increasing point values, from 100 to 5,000. Unlike Raizing games, the values of the stars only reset when you die. If multiple stars are on screen at once, they will increase in value as you collect them. In addition, anything you shoot will give points even if you don't damage it. When bosses appear on screen, pummel them for points even before they are actually vulnerable and you can get several thousand points. It's all fairly basic.