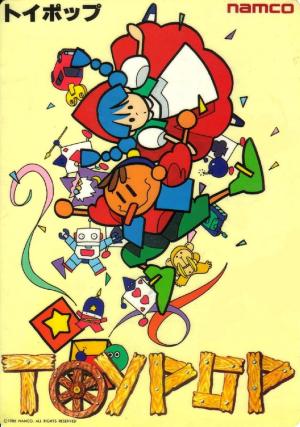 Toy Pop is a top-down multi-directional shooter that can be played both single-player or with two players simultaneously. The players venture through 44 floors (the game uses the toy-themed term "Box" as opposed to "Floor", to fit with the game's setting) collecting four gold hearts contained in jars on each floor in order to advance. Along the way, the players must open gift-wrapped containers concealing either weapons or score-increasing bonus items; these various weapons are used to defeat several different varieties of enemies (Heitai, Cars, Tanks, Domdoms, Trumps, Osaru, Robots and occasionally the evil wizard Mahou), with many typically vulnerable to only one type of weapon