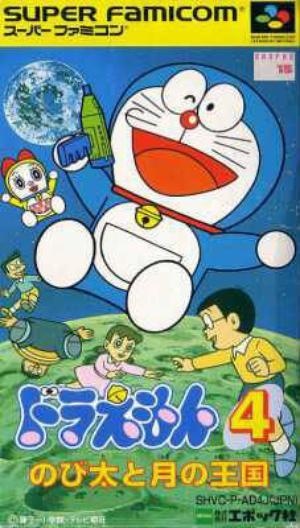 Doraemon 4: Nobita to Tsuki no Oukoku

The game is based on the popular manga series Doraemon. Doraemon is a blue cat robot who came from the future to protect a Japanese boy named Nobita. Nobita always gets himself in all kinds of troubles, so his grandson in the future decided to help him by sending Doraemon to keep an eye on him. One day, Nobita and Doraemon are looking at the beautiful moon, when suddenly a strange light engulfs them. They learn that something terrible has happened in the Moon Kingdom. Now they must travel to the moon and discover what is going on. This is a platform action game that is somewhat similar to Super Mario World. You travel on a world map and enter various platform locations. Before each level, you can choose to play as either Doraemon, Nobita, or other four available characters. You can jump on enemies' heads or shoot at them with various weapons to eliminate them. There are many items and upgrades scattered around the levels, and sometimes it is possible to power-up by using two characters simultaneously.