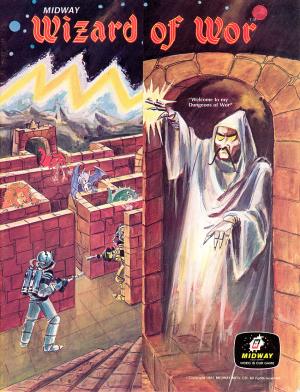 Wizard of Wor is an action game for one or two players. The game takes the form of several maze-like dungeons infested with monsters. The players' characters, called Worriors, must kill all the monsters by shooting them. Player one has yellow Worriors, on the right, and player two has blue Worriors, on the left. In a two-player game, the players are also able to shoot each other's Worriors, earning bonus points and causing the other player to lose a life. Team-oriented players can successfully advance through the game by standing back-to-back (such as in a corner) and firing at anything that comes at them. Each dungeon consists of a single-screen rectangular grid with walls and corridors in various formations. The Worriors and the monsters can travel freely through the corridors. Each dungeon has doors at the left and right edges, which connect with each other, making the dungeon wrap around. Whenever a door is traversed by a player or monster, both of them deactivate for a short period, making them impassable. A player who exits the door can pop back through the door immediately when the Worluk or Wizard is in the dungeon. A small radar display indicates the positions of all active monsters.