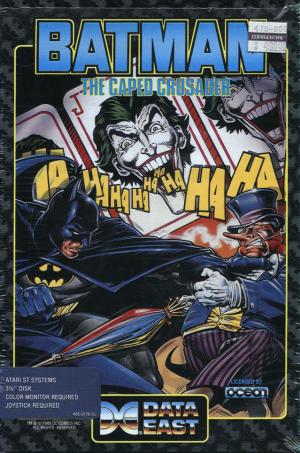 Batman: The Caped Crusader is an action adventure game developed by Special FX Software (Jonathan Smith, Zach Townsend, Charles Davies, and Keith Tinman) and published by Ocean Software in 1988. It was licensed by Data East and Erbe Software for release in North American and Spain. It was the second of three unrelated Batman games released by Ocean, after Batman in 1986 and preceding Batman: The Movie in 1989. Batman: The Caped Crusader is an arcade adventure which uses a unique style, innovated by Jonathan Smith and Charles Davies, to display the action as though it takes place in a comic book. The game consists of two plots involving The Penguin and The Joker. The Penguin plans to take over the world using an army of robotic penguins! In The Joker riddle, he has kidnapped Robin and has plans to blow him up.