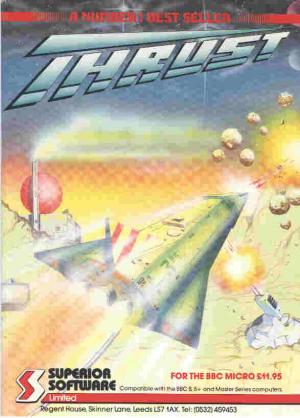 The aim is to pilot a spacecraft which must pick up a pod using a tractor beam and fly it into space. The ship and pod are subject to gravity and inertia, and being connected by a stiff rod can end up spinning around each other, out of control. Hitting the walls of the cave with either the ship or the pod results in death. Each planet has turrets which fire bullets at the ship, which can be destroyed with a single shot, and a reactor which powers the defence system of each planet. If the reactor is shot enough the turrets will cease firing for a short amount of time. Hitting the reactor with many bullets causes it to go critical and destroy the planet in 10 seconds - the ship must escape into space before this happens, with or without the pod (more points are gained if the pod is present). Fuel is needed to manœuvre the ship and can be collected with the tractor beam, if the ship runs out of fuel the whole game is over. A shield is also available, although when activated it uses fuel and the ship cannot shoot.