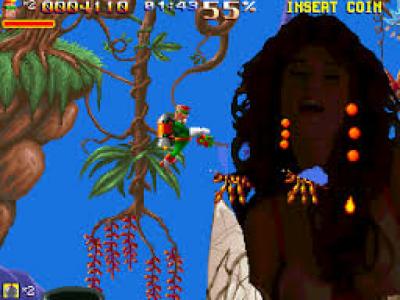 Excelsior is a puzzle/shooter game developed and published by Playmark for Arcades. The game is based on an Italian adult magazine of the same name. In Excelsior players are tasked with chipping away at a large stone pillar. As players chip away at it a nude model will be revealed, either male or female depending on what players choose when starting the game. While players are trying to chip away at the pillar, enemies will fly in and cause damage to the player if touched. Players can shoot projectiles at the enemies in order to defeat them. Various power ups will appear that will help the player. In between stages players are taken to a bonus game that has them chipping away at a larger brick wall. The bonus game progress will be saved until the next time it is played until players successfully complete it.