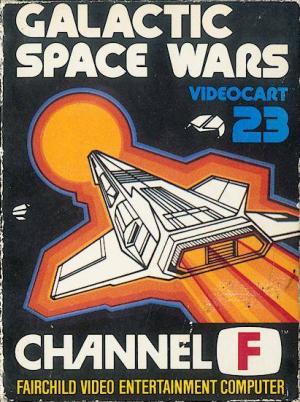 In Galactic Space Wars, the player controls of a fighter spacecraft with the sole objective to find and destroy enemy space ships. The players takes a first person perspective from inside the cockpit searching the vast area of space to locate enemy craft. Once one is located, players try to quickly fix their laser's sight on the enemy and shoot it. If the enemy stays on the screen for too long, it will fire one shot at the player's ship and score a hit. There are four different enemy ships, each worth a varying amount of points. Players are given a limited amount of time to destroy as many ships as possible, while trying not to let the enemy ships fire back. Lunar Lander is inspired by the same titled arcade game Lunar Lander. Players pilot a lunar lander and attempt to have a soft landing on a platform. The lunar lander has a limited amount of fuel to maneuver around, thus adding to the challenge. Players must gently and smoothly lower the lander onto the platform, as coming down too fast or missing the platform crashes the lunar lander. There is also a timer keeping count of the amount of time it takes for the player to land. The objective is to land the craft in the least amount of time possible.