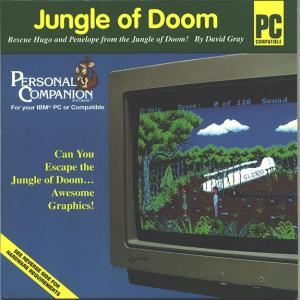 Hugo III: Jungle of Doom is the third and final installment in the EGA adventure series Hugo. The game features the existing engine in previous Hugo games along with some new features. These include a turbo button, and a "hints" feature. In this game Hugo and his girlfriend Penolope crash in a jungle somewhere in South America and she is soon bitten by a poisonous snake. As Hugo you venture through the jungle, confront a witch doctor and try to find the "pool of life". The Hugo series goes on to become a 3d first person shooter, Nitemare-3D. Re-released in 1995 commercially as part of the Hugo Trilogy. The trilogy re-release included both the original DOS version and the enhanced Windows version, along with a hint/answer booklet. The Windows version retained the interface of the original DOS version but added a new point-and-click mouse interface, MIDI background music, and digital sound effects. The point scoring system was also modified to increase the total points from 190 in the DOS version to 200 in the Windows version.