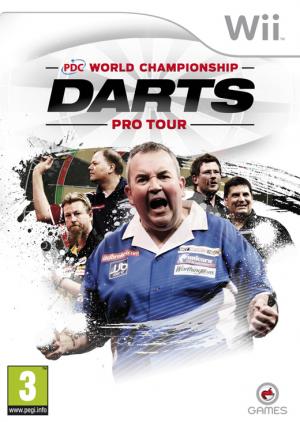 Bring the passion and competition of tournament darts to your living room and take on your friends and family with the launch of the PDC World Championship Darts: Pro Tour. This game builds on the successes of its predecessors, featuring international superstars like Phil 'The Power' Taylor, Raymond van Barneveld, James Wade, Mervyn King, Simon Whitlock and Jelle Klaasen; as well as updated graphics, character models, and an optimised control system. PDC World Championship Darts: Pro Tour provides fluid, accurate and simple throwing dynamics, getting players closer to the action than ever before. The 2010 iteration in the phenomenally successful franchise has evolved to support the latest developments in motion control gaming and will feature full Wii Motion+ support, allowing more players more ways of joining the game. Further establishing its heritage as the definitive darts game for fans of the sport, PDC World Championship Darts: Pro Tour's in-depth career mode also supports the latest tournaments, including the Grand Slam of Darts, a new fixture in the PDC events calendar. Player View puts you at The Oche in the eyes of a Pro, with gamers being able to control player celebrations. Plus the atmosphere will be further enhanced with an all-new commentary from TV's 'Voice of Darts' Sid Waddell and John Gwynne; top level match referees, Bruce Spendley and Russ Bray; and Master of Ceremonies, John McDonald.