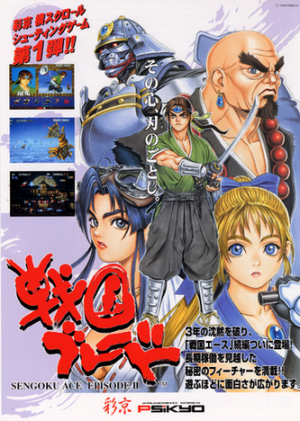 Sengoku Blade: Sengoku Ace Episode II, originally released in Japan as Tengai (戦国ブレード), is a horizontally scrolling shoot 'em up video game released for arcade machines in 1996 by Psikyo as a sequel to the 1993 shooter Sengoku Ace. It was later released as a part of Psikyo Shooting Collection Vol. 2: Sengoku Ace & Sengoku Blade for the PlayStation 2. The game is set in a historical fantasy version of the Sengoku period of Japanese history, featuring demons, magic and steam-powered robotics. It was followed by Sengoku Cannon: Sengoku Ace Episode III, released for the PlayStation Portable in 2005.