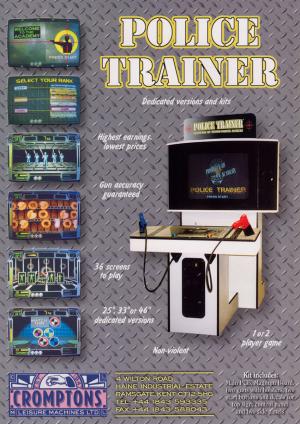 Police Trainer is a light gun arcade game released by P&P Marketing in 1996. A sequel, Police Trainer 2, was released in 2003. Players have only three lives to complete six exams in each difficulty. Players can lose lives by either failing to reach a quota, not defusing any C4 or letting the guards hit the player. In order to complete the competition mode, players must lose one life on player 1 and lose one life on the other. If the players fail each mode, they can either try the same mode again or select a different mode. If the players completed each mode, they can select another mode until a difficulty is completed. Each difficulty consists of six stages. Players can put initials after completing the Commissioner difficulty. Shooting the incorrect targets receives a –100 points penalty.