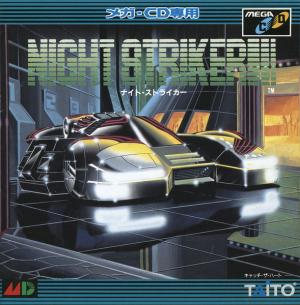 Night Striker (ナイトストライカー) is an arcade game developed by Taito. It is a futuristic on-the-rails shooter which plays similarly to Sega's Space Harrier, though has you pilot a hover vehicle instead. The game was brought to the Sega Mega-CD in 1993, where graphically it was downscaled for the weaker hardware. It was also brought to the Sega Saturn as Night Striker S (ナイトストライカーＳ) in 1996 - essentially the same game, but with an extra "Saturn Mode" and a few small enhancements. No versions have ever left Japan.