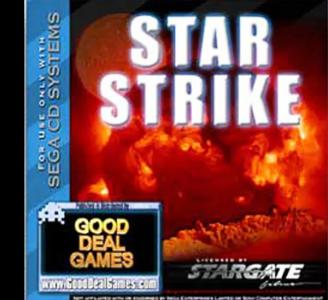 Star Strike is an Action game, developed and published by Good Deal Games, which was released in 2000. Launching from repair bay 28 of the Galatea, you guide your Blue Fighter Wing through the Launch Ring at lightspeed, entering enemy territory, sector Delta Five Niner! Your mission: Rescue the Orange Wing Center which was captured alive, before the enemy ingests his brain -- A brain which they consider to not only be an excellent source of protein, but also, once consumed, transfers all knowledge to the species - Including military secrets, vital to the survival of all mankind! Can you rescue your comrad & Destroy the opposing Protoid Forces?