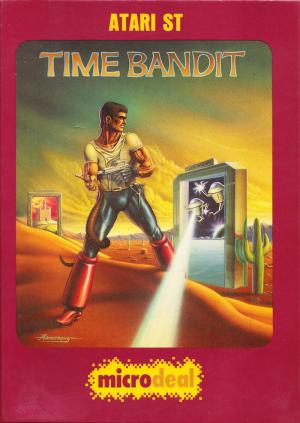 Time Bandit is a Gauntlet-style arcade game with text adventure elements.our bandit visits 16 different worlds throughout time to grab as much loot as possible and, in the long run, do some universe-saving stuff as well. Each of the 16 locations -- featuring such varied places like a medieval arena, a bomb factory, a wrecked spaceship and a ghost town -- is basically a labyrinth filled with treasure and monsters. You've got to dodge these or blast them with your weapon, while collecting keys, opening doors and searching for the exit. Time Bandit adds to the fast arcade action with text adventure scenes. Due to this mixture, you will occasionally bump into persons or computer consoles with which interaction is possible. For example, you've got to explore and repair the damaged spaceship Excalibur. However, the parser is crude at best; you'll have to know exactly what to do, or else you will trigger no reaction. Gaming veterans will discover a score of elements of and allusions to arcade classics, such as Tutankham, Pac-Man, Centipede, Bomberman, and others.