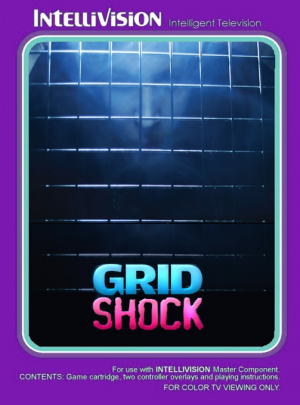 [Unfinished 1983] An arcade game. Carom your shots against the moving wall to fill in the pattern on the back grid. This original game by Andy Sells looked great; it had a strong 3-D effect as the moving wall swept back and forth across the screen. But while Andy wanted to continue developing the game, management wanted to take advantage of his musical talents. (Shortly before coming to Mattel, his award-winning song "You Love Love [More Than You Love Me]" was recorded by the English group Buck's Fizz. Ask for it by name.) Andy was continually assigned to work on music and sound effects for other games, including Shark! Shark! and TRON Solar Sailer. He also co-developed the Intellivision sound development tool, Mr. Sound. Whenever he had a chance he returned to Grid Shock, but the game was never elevated to official status. While the game never made it onto the Intellivision release schedule, it was demonstrated as part of the Intellivision III product line. This was bogus; when the Intellivision III wasn't ready to be shown at the June 1983 Consumer Electronics Show, regular Intellivision screens with particularly nice graphics were passed off as examples of the forthcoming system. Grid Shock was one of these; color packaging was even printed up for it. After C.E.S., Andy never had a chance to return to the game. His boss, Manager Russ Haft, left Mattel for Atari; Andy was tapped to take his place. A short time later, Andy, too, left for Atari and Grid Shock was abandoned.