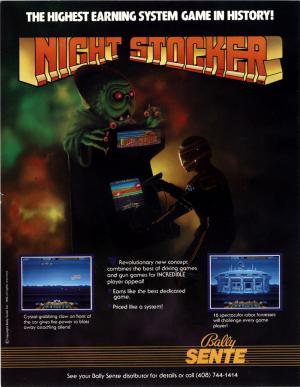 Night Stocker is a first-person racing/shooter arcade game, that was released by Bally and Sente in 1986; it was the second of the third batch of games to run on the company's SAC-I hardware, and as the name suggests, it's the sequel to Stocker, which was released two years earlier. The player must again use a steering wheel to take control for a car (but this one does not require a pedal, because it is always moving forwards over the surface of an alien planet), with a lightgun to make it fire shots at the various enemies, that are flying towards it - however, it only has a limited amount of ammunition, which is indicated by that text "SHOTS" in the top-right corner of the screen. To the left of it, that text "SHIELDS" indicates your car's remaining energy; it will decrease if it gets hit by enemies, but will be refilled when it collects a crystal. Once it has run out, the game will end - and to the left of it, that text "DISTANCE TO FORT" indicates the distance to the robot fortress, at the end of the stage (once you have reached it, this shall change to "ENEMIES IN AREA"). There are a total of sixteen stages in the game; however, once you have cleared the last one, the game shall start over again rather than end.